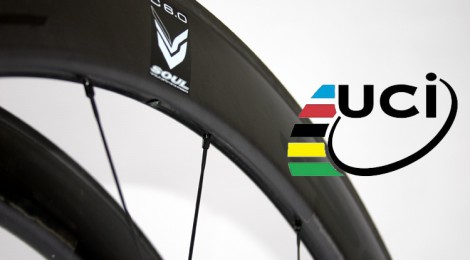 In 2013, we took the bold step of getting our wheels tested and certified for UCI approval and usage in UCI sanctioned events. We are proud to announce that we were successful in obtaining UCI approval for our C5.0T and C6.0T wheelsets. The criteria for approval involves a series of crash tests that would scare even the strongest steel rims, but our wheels managed to pass them all and then some.

The aim of the test is to evaluate the impact strength of bicycle wheels. It was carried out on the “crash test” stand of the Cockerill – Sambre Research and Development Centre. The stand comprises a weighted slide, or ram, moving at a constant speed and impacting against the wheel to be tested. The wheel is mounted on a device fixed to the frame of the test machine. The frame is equipped with a piezoelectric cell to record impact data. The test is carried out for the slowest displacement speed of the slide (10 km per hour) bearing in mind that the minimum mass of the latter is 100 kg. Two impact configurations are specified in the test:

Spoked wheels are tested in two different positions, with the impact occurring either directly against the spoke, or between two spokes). The impact tests are filmed by a high-speed camera (600 images per second) in order to evaluate the risks engendered by damage, if any, to the wheel. Filming takes place behind a protective PMMA screen. A recording is supplied showing the impact at three different film speeds.

You can find a list of approved wheels here.